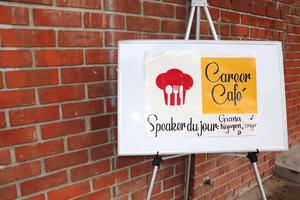 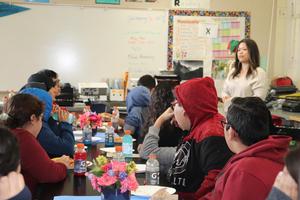 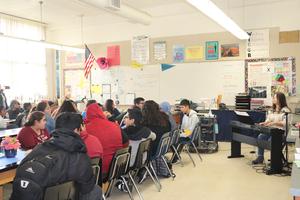 Graves Middle School students signed up to attend a Career Cafe on Wednesday, January 16, to hear from Giana Nguyen who is a singer and song writer.

Career Cafe gives students the opportunity to attend a luncheon and hear from a variety of professionals. This month Ms. Nguyen was the guest speaker and spoke to students about her personal, educational, and professional journey that brought her to where she is today.

Giana was a refugee from Vietnam. Her family experienced many hardships including unsuccessful trips to safety and loosing her older sister. After multiple attempts, she safely traveled by boat with her father to Indonesia. From there they began working on getting their paperwork in order, and a few years later they were able to come to America.

She went on to share that when they moved to America she was raised by her father because her mother had to stay in Vietnam. They lived a very simple life but her father gave her, “the greatest gift her could give,” piano lessons.

As she got older she wanted a job that had security. She went to college and joined the medical field. After a few years she began to think about what her true passion was, music. She decided to do a huge career change and pursued music full-time. Since then she has written multiple songs, has two albums, and teaches piano lessons. She encouraged students to find what they are passionate about and pursue those dreams.

After she spoke she played the piano, sang a couple songs, and even took some requests from the audience. She then had a Q and A with the students and answered their questions about music and her profession.