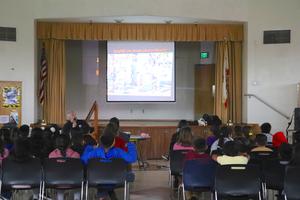 McKibben Elementary School got a visit from Los Angeles Public Works on Tuesday, September 10, to hear about graffiti and how it affects the community, its consequences, and its dangers.

Students were able to watch a video about what graffiti is and how it impacts their community. They also learned how it costs the city and it’s citizens millions of dollars each year to repair the damage of graffiti. Public Work speakers revealed that in Los Angeles County alone graffiti removal costs citizens roughly 40 million dollars a year.

Public Works shared real life examples of people who have been affected by graffiti and its consequences. After learning about how graffiti damages a community and the consequences one can face for participating, students learned the dangers of it. Public Works’ presenters shared about how you never approach a person who is doing graffiti, simply report it.