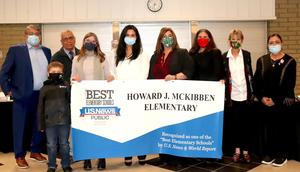 Howard J. McKibben Elementary has been named a “Best Elementary School” by US News & World Report for successfully reaching and exceeding academic proficiency.

According to the U.S. News report, Mckibben is ranked #1559 out of over 47,000 California Elementary Schools.

For each state, schools were assessed on their student’s proficiencies in mathematics and reading, as measured by state assessments. Half of the ranking formula was based on the results while the other half was the consideration of those results in the context of the school’s socioeconomic demographics.

“Our teachers, parents, and students work together as a team in order to achieve success. While McKibben has been a data driven school for many years, in the past few years, we have taken data analysis deeper than ever before,” Mckibben Principal, Janette Tyrone, shared.

“Teachers maintained a data wall and compared test results, from there, they were able to reflect on the factors that contributed to student success and devise a plan for improving on future assessments,” Tyrone stated. “Students are involved in their academic achievement as well. They met with their teachers one on one to take a close look at their scores and create a goal for their next assessment period.”

McKibben shared that they recognize that academics is tightly intertwined to connecting with students and families. Aside from strong academics they put an emphasis on fun as well, knowing that if students have something to look forward to, they will be more likely to attend and participate in school. In this effort, they have held award assemblies, going virtual during the pandemic, and are dedicated to their PBIS program called House Rotations.

This “Best Elementary School” recognition was based strictly off data analyzed by US News & World Report, McKibben did not apply for this award.